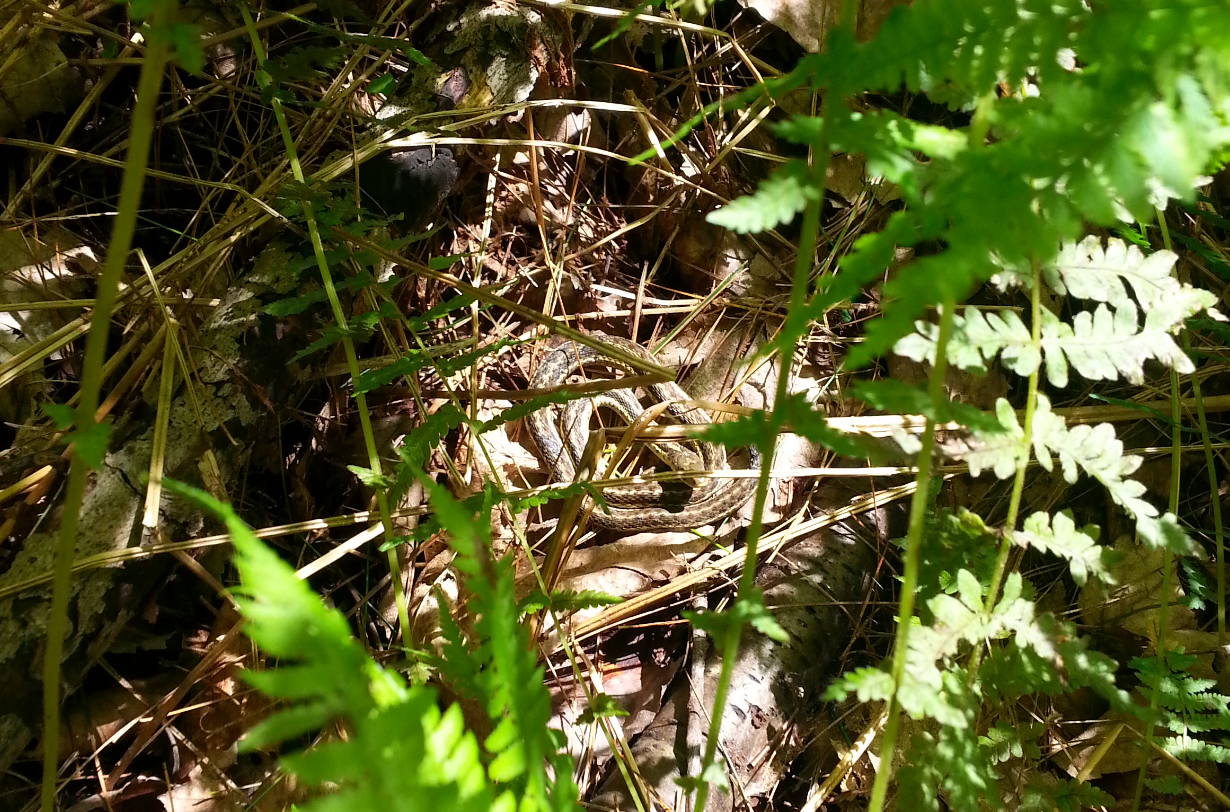 Took a walk Monday to put a trail camera up where I'd seen (and got 1 pic) of a decent 3.5 (I believe) year old buck last year (below).

I always wonder, when walking through Fern's that are waist high, if there are any creatures I'm walking past.  If venomous snakes were common here, vs only documented in like 3 areas of the state, I'd be nervous! 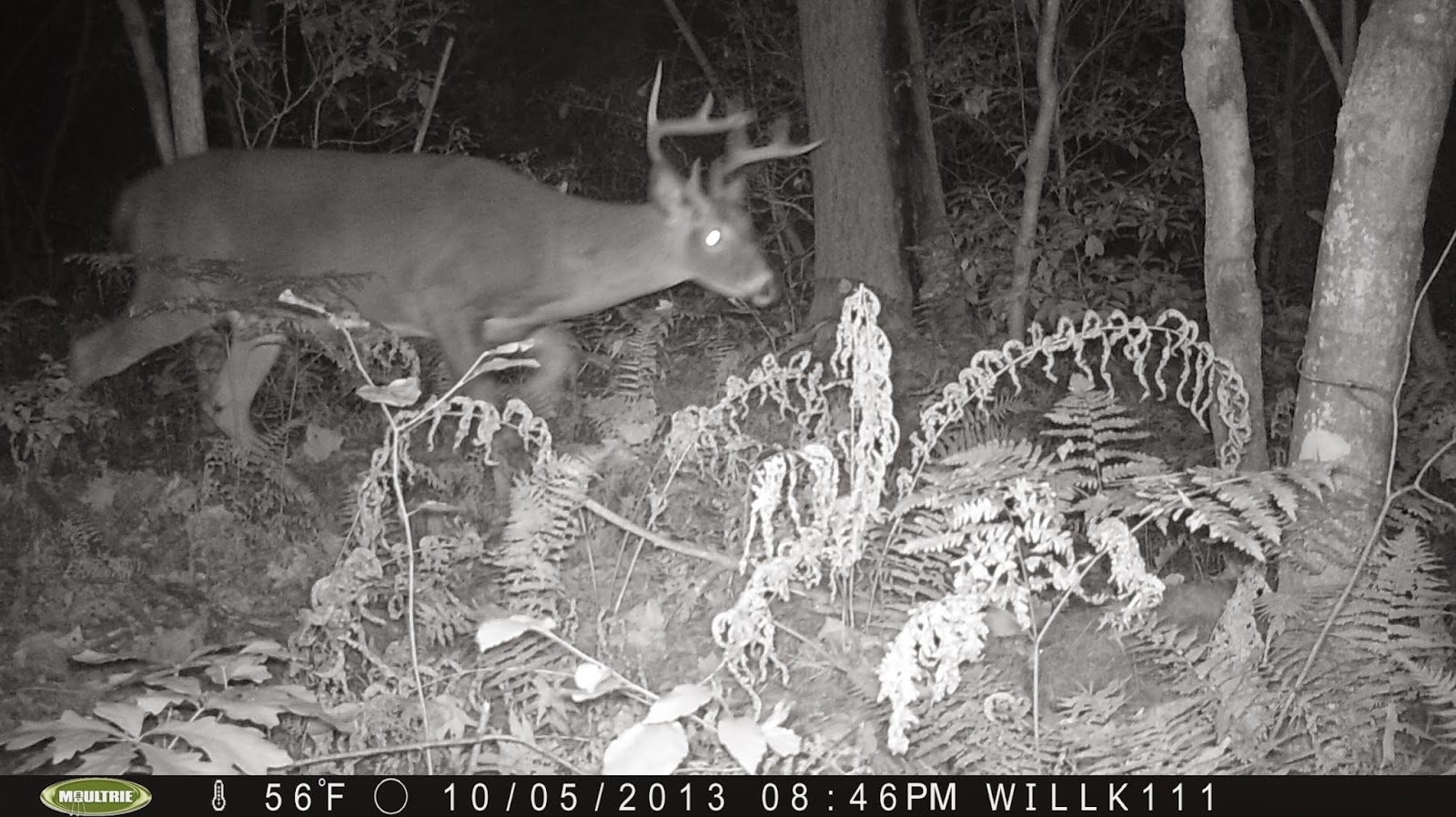 Today though, while wading through the ferns I was thinking to myself: I wonder if I have ever stepped on a snake?  I looked down, and a stick looked weird... so I stopped and spread the ferns a bit.  Low and behold... the funny stick was a little garter snake.  Cute little guy basking in a sunny spot between the ferns... Glad I didnt step on him! 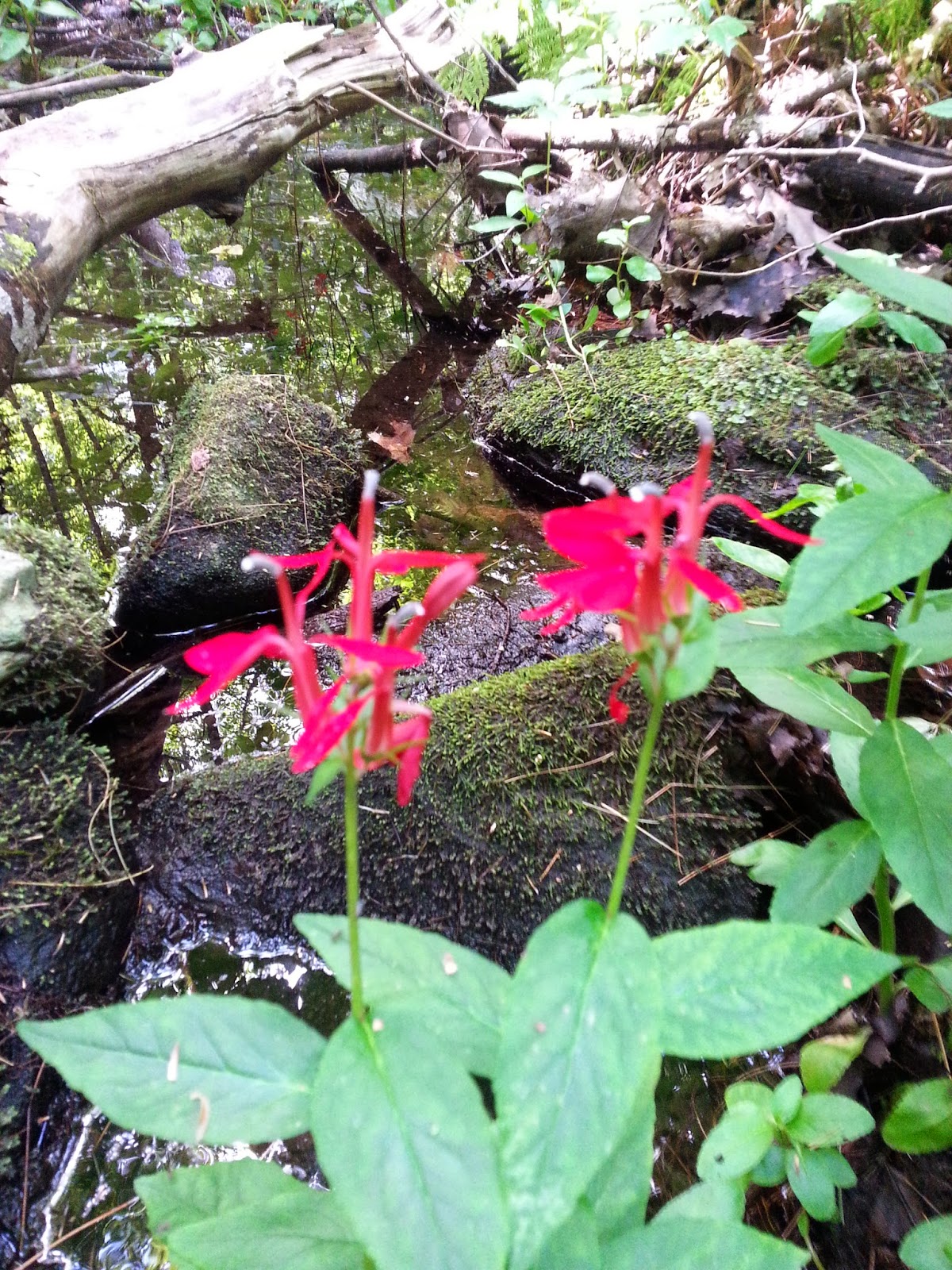 I'm not sure if these really are called "cardinal flowers" but that's what the old timers where I grew up called them... so I call them that as well.  Such pretty red flowers that grow up among the rocks at the edge, and even into streams here. 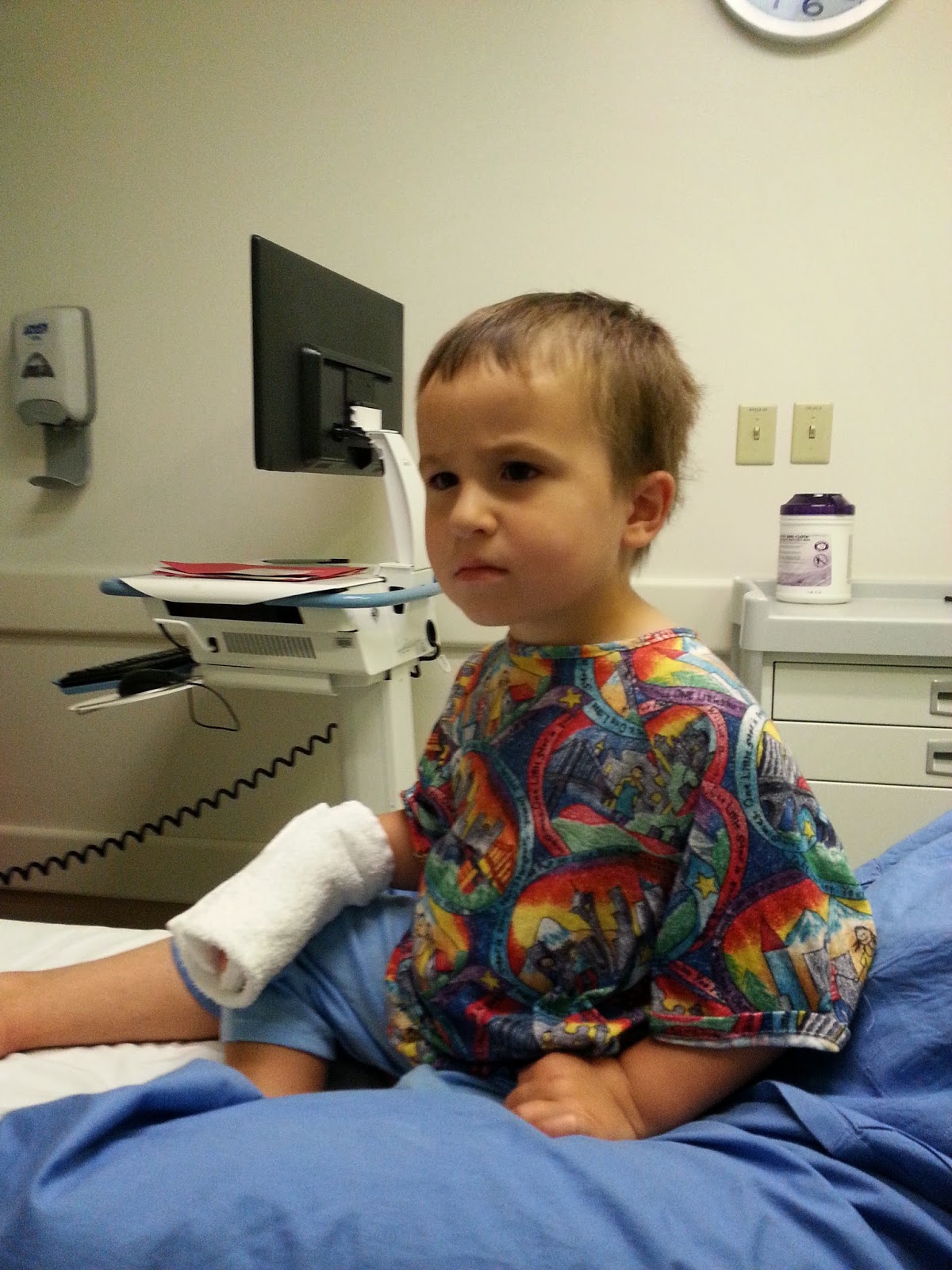 Best of all, the boy had his 18 months post treatment scan Wednesday and it went well.  He's very intently watching Tinkerbell in the pic :) here before going back for MRI.  There is a funny spot in his left temporal lobe that they are watching, it has no evidence of being tumor... and they suspect it's chemo or hydrocephalus related... but are not really sure - so it's just watch and see.  It did not change his status as No Evidence of Disease (NED) though which is super! They have no worries about it being a tumor, which is good news!  His blood was solid, a few funny things, but nothing that indicates secondary cancer (cancer caused by cancer treatment)... So, overall, he's doing well and is cleared for starting pre school next week.  Awesome!

Be well everyone!
Will

Posted by Hibernation at 7:48 AM No comments:

Our in home child care has had a rough week this week.  A tough situation made it impossible for her to come over Thursday and Friday... Thursday I worked and my mom watched the kids... Friday mom couldn't do it, so the kids and I had an unexpected day of fun.

After breakfast, I suggested a hike in the woods - and they were both excited.  We headed out to my home town - which is a very small, rural, New England town about 40' from our current home... And we hit the woods.

I knew I wanted to walk a specific trail off a seasonal road.  The trail was in an area where I rarely see ticks, and where I often see wildlife.  It also runs parallel to a nice wild brookie stream.  I would not have a rod in hand today, but I could point out likely spots and share a beautiful brook with the kids - that's just as good!

The first couple hundred yards off the road through soft hemlock forest, the kids repeatedly stopped to collect Red Eft's - the terestrial juvenile stage of the red spotted newt.  They were everywhere after last nights rain and the epic monsoon we had Wednesday.

Once we reached the stream, the kids did, what any self respecting kid does when they come to water - throw sticks, pine cones, leaves etc into the stream!  It was pretty fun watching them say "bye bye" to sticks as they floated away.

In the pic below in the background, you see the confluence of the small stream, with a slightly larger stream... In reality, it's not that big either, rarely more than 10-15 yards across in this section... The larger stream, upstream from this point holds wild brookies as well... below this point, they are fewer between, though they are still there if you look hard enough. 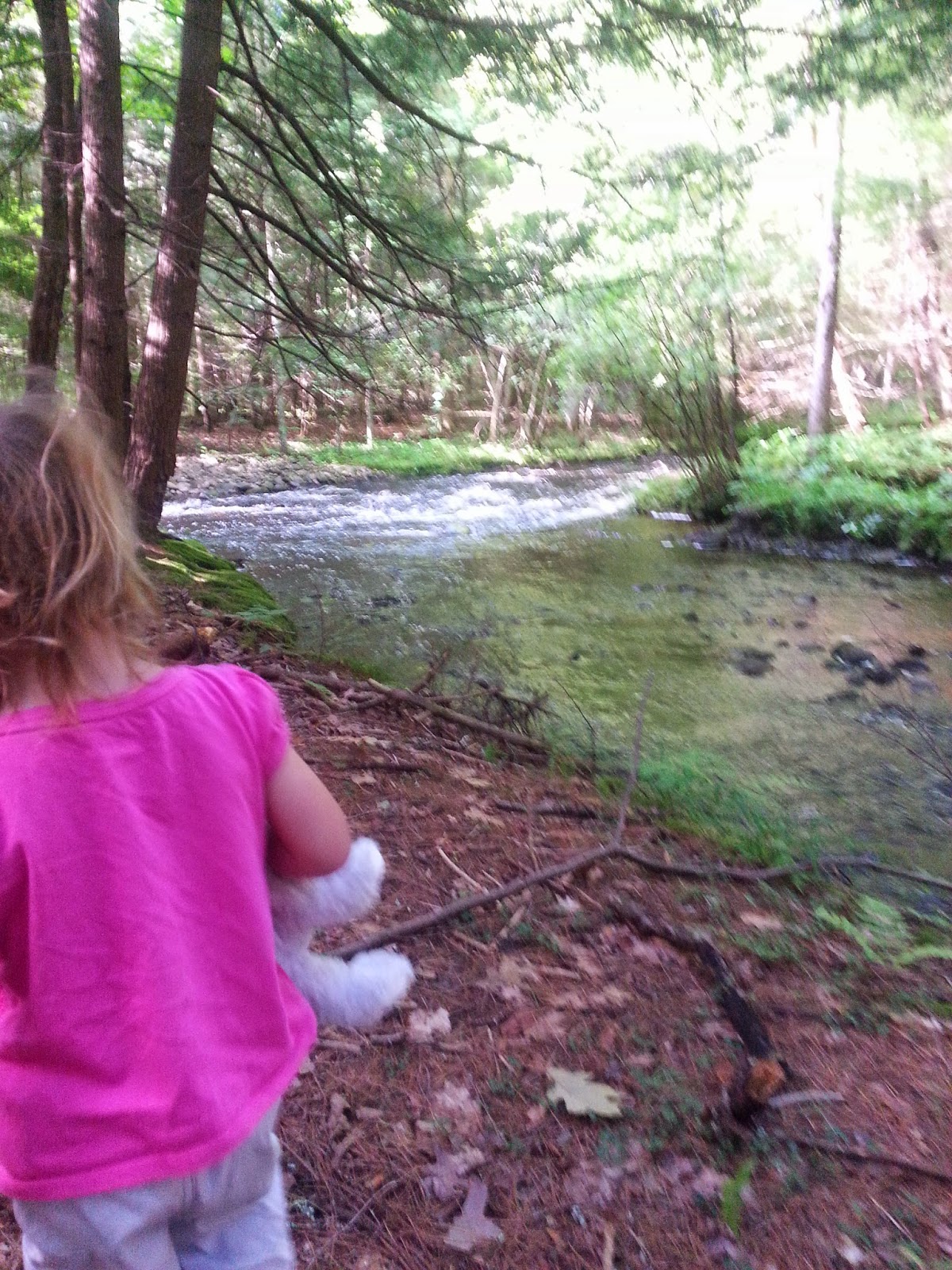 We started up the stream, and after passing the first good run, I stopped to take a down stream pic, the space in the middle of that triangle between the three bigger rocks is a spot that has provided several beautiful trout over the years. 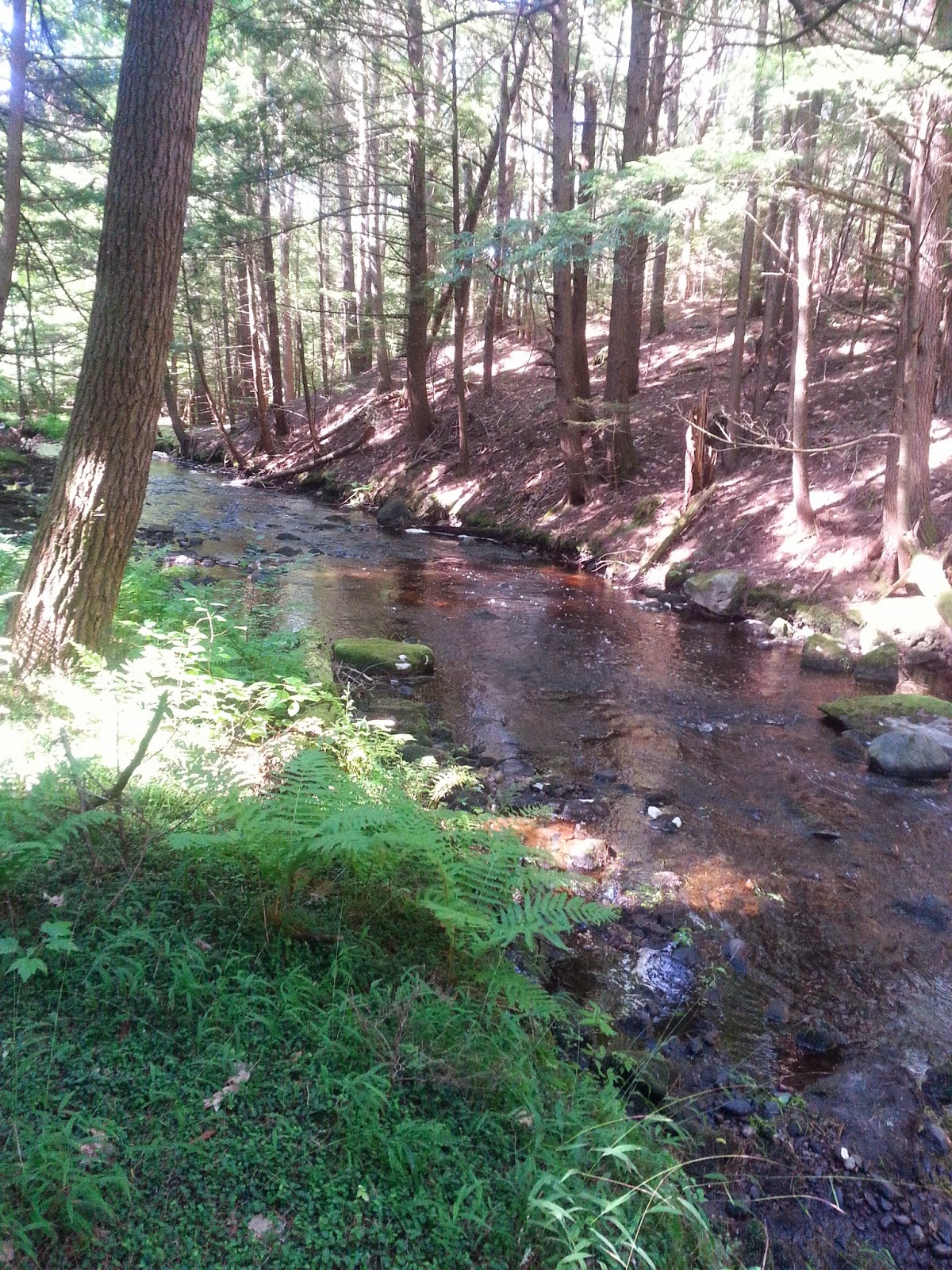 Now the pace of the stream quickens.  It's still not raging, but, when the water is high, it can be quite a sight through here.  Then again, about a mile upstream, the little brook rips through a series of granite shoots and falls - it's absolutely gorgeous, especially after heavy early June thunder storms - super green moss and leaves but very high flow... AWESOME! 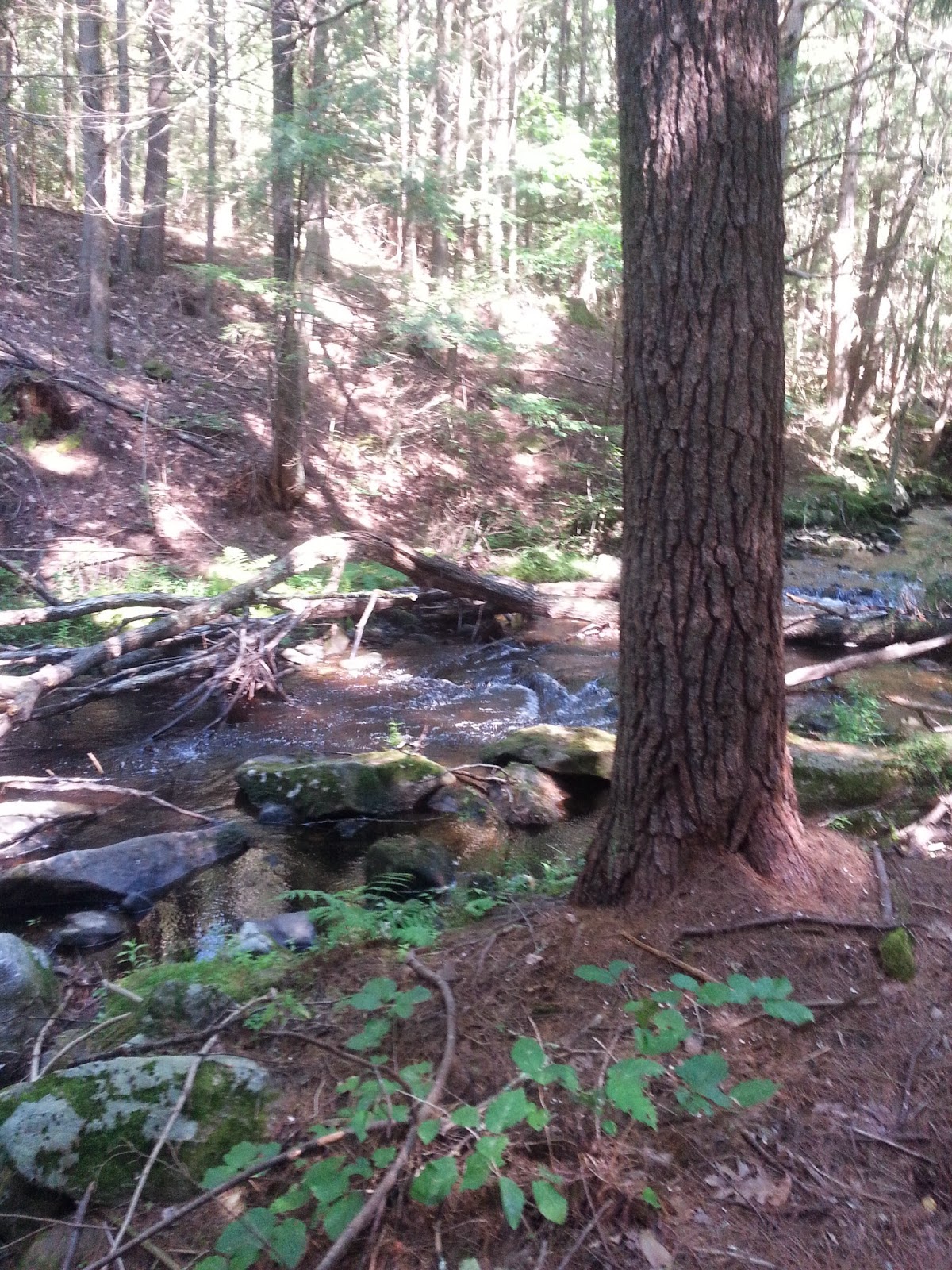 All of this wood is great organic matter.  I don't get it when folks get mad about trees being in streams.  Yes, it makes the fishing tougher, but it's better for the fish - seems like a worthy trade to me!  Between the tree in the foreground, and the bigger tree in the distance is another pool / run that has yielded many brookies... From when I used nothing but worms as a kid, to today... it's been a good spot. 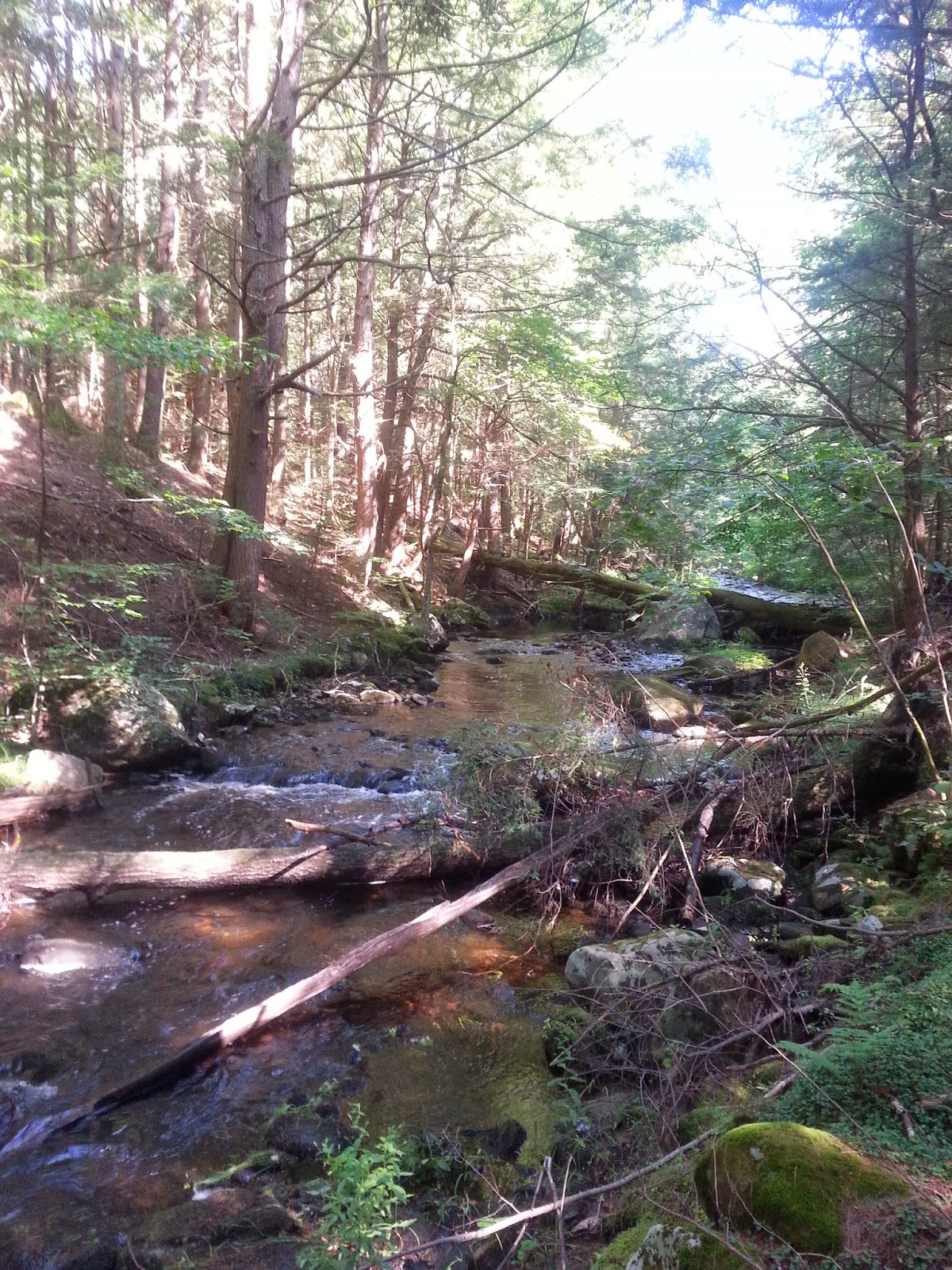 This is a great corner, it's pretty deep (2-3' is deep here), and it has some overhead cover from the log and nice undercut boulders for the trout to hide under. 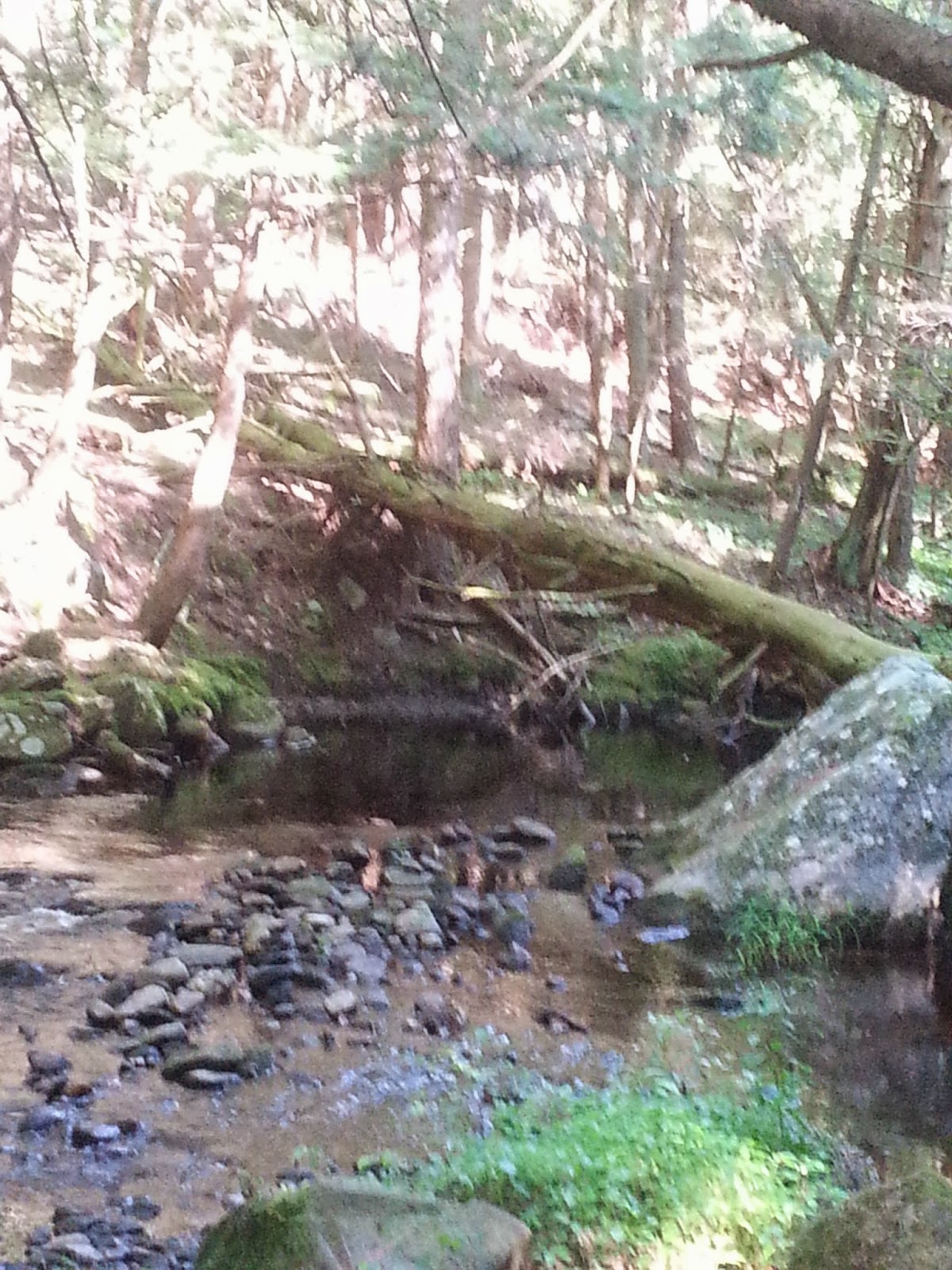 There is a brief section, about 2/3 up to a neat little bridge over the stream, where hardwoods take over for about 50 yards.  in this spot, the stream tumbles and rolls through pockets... it's a nice spot to drift bushy dry's like bombers or elk hair caddis and mini muddlers. 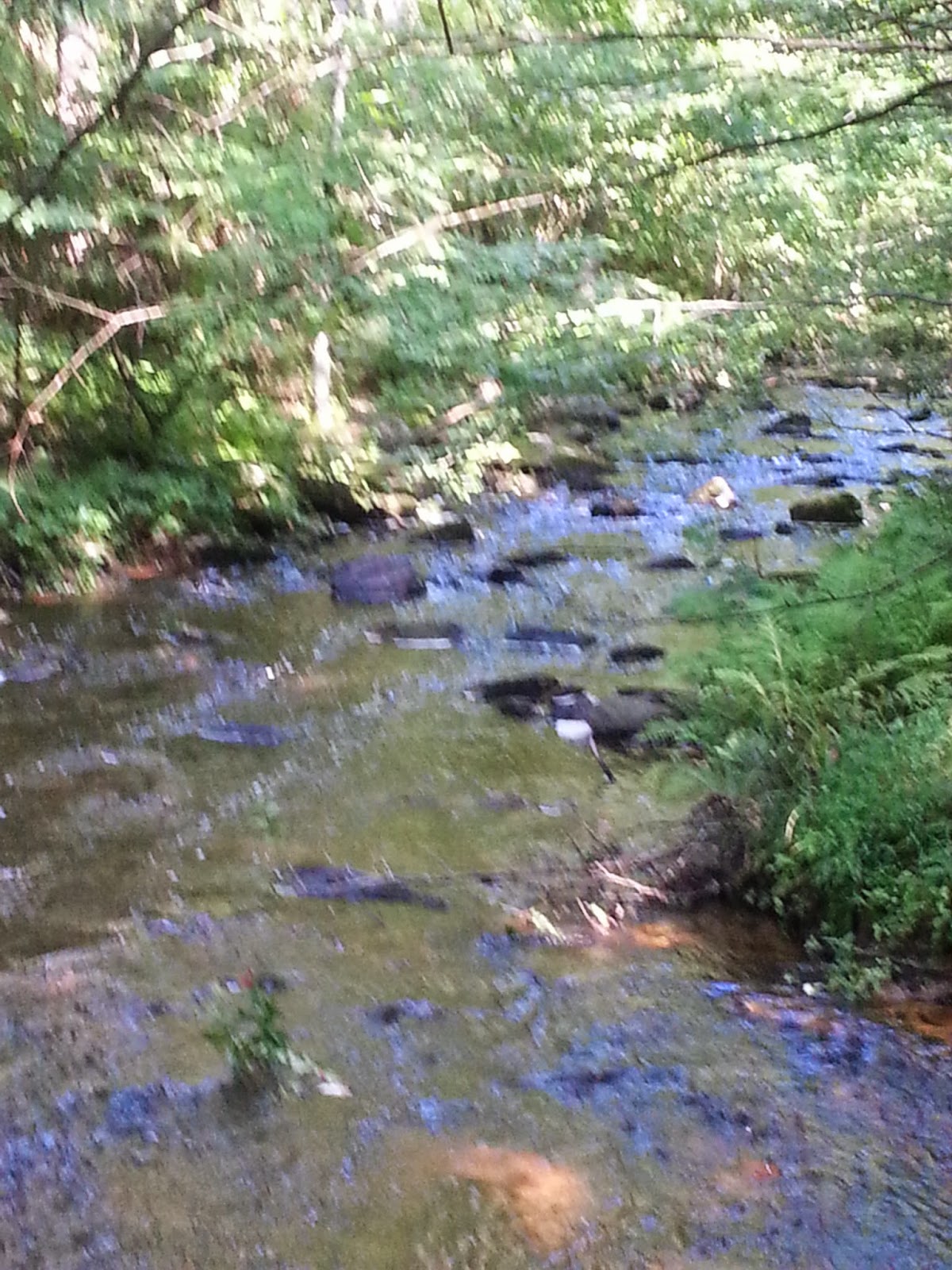 In this area, the kids enjoyed walking at a brisker pace.  Emily asked to have her kitty put in her shirt - like a piggy back ride - and Will had his hiking stick he'd found... the trail is very narrow and clear here, often cutting through tall ferns.  It sort of encourages you to travel, and the little people decided to do just that through here! 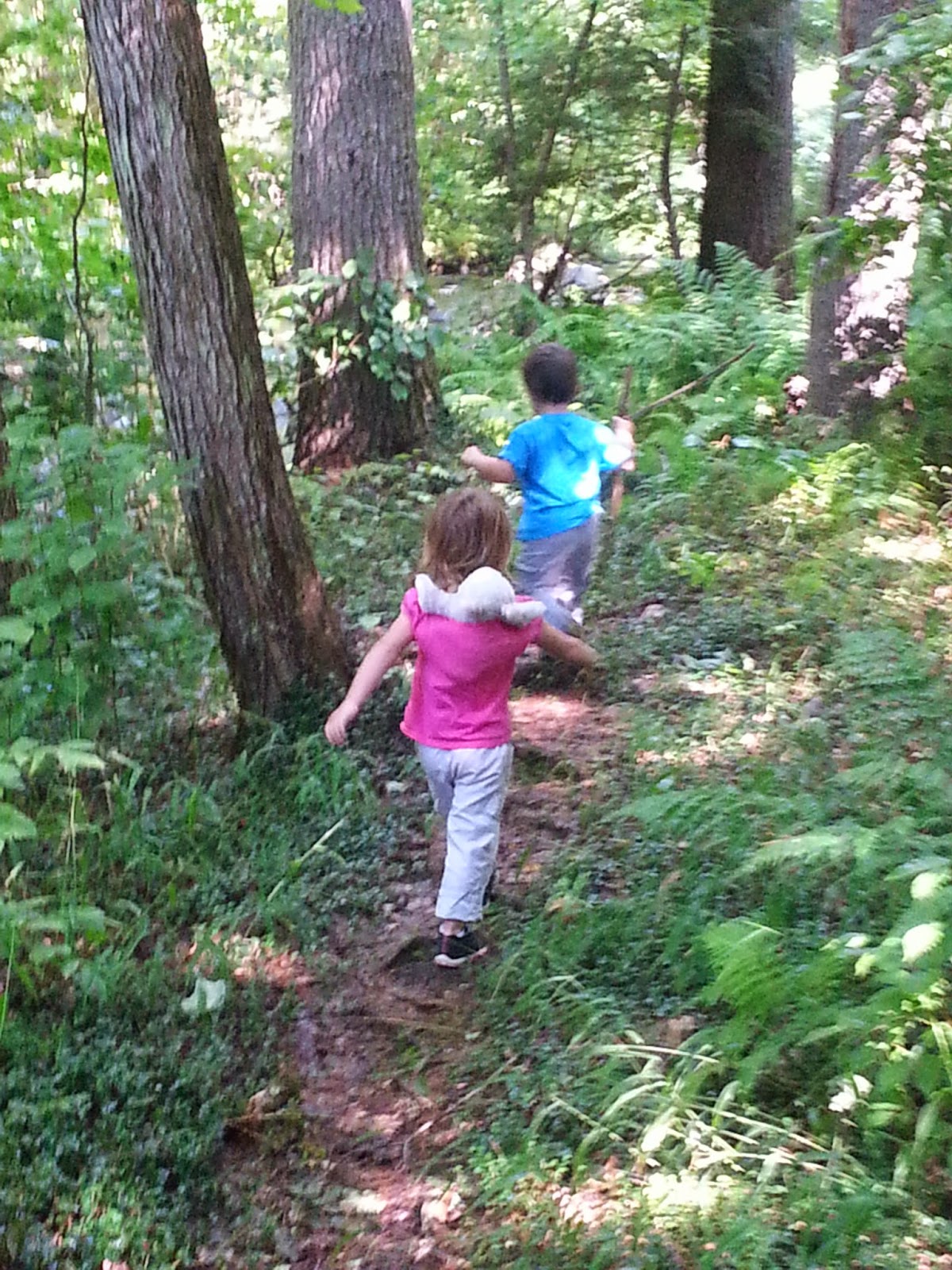 Almost to the bridge, and the stream mostly is a series of pockets with a few "pocket pools".  That's my lingo, for a pocket that seems to big to be a pocket, but is not really a pool.  Just around the bend and up 60-70 yds is the bridge. 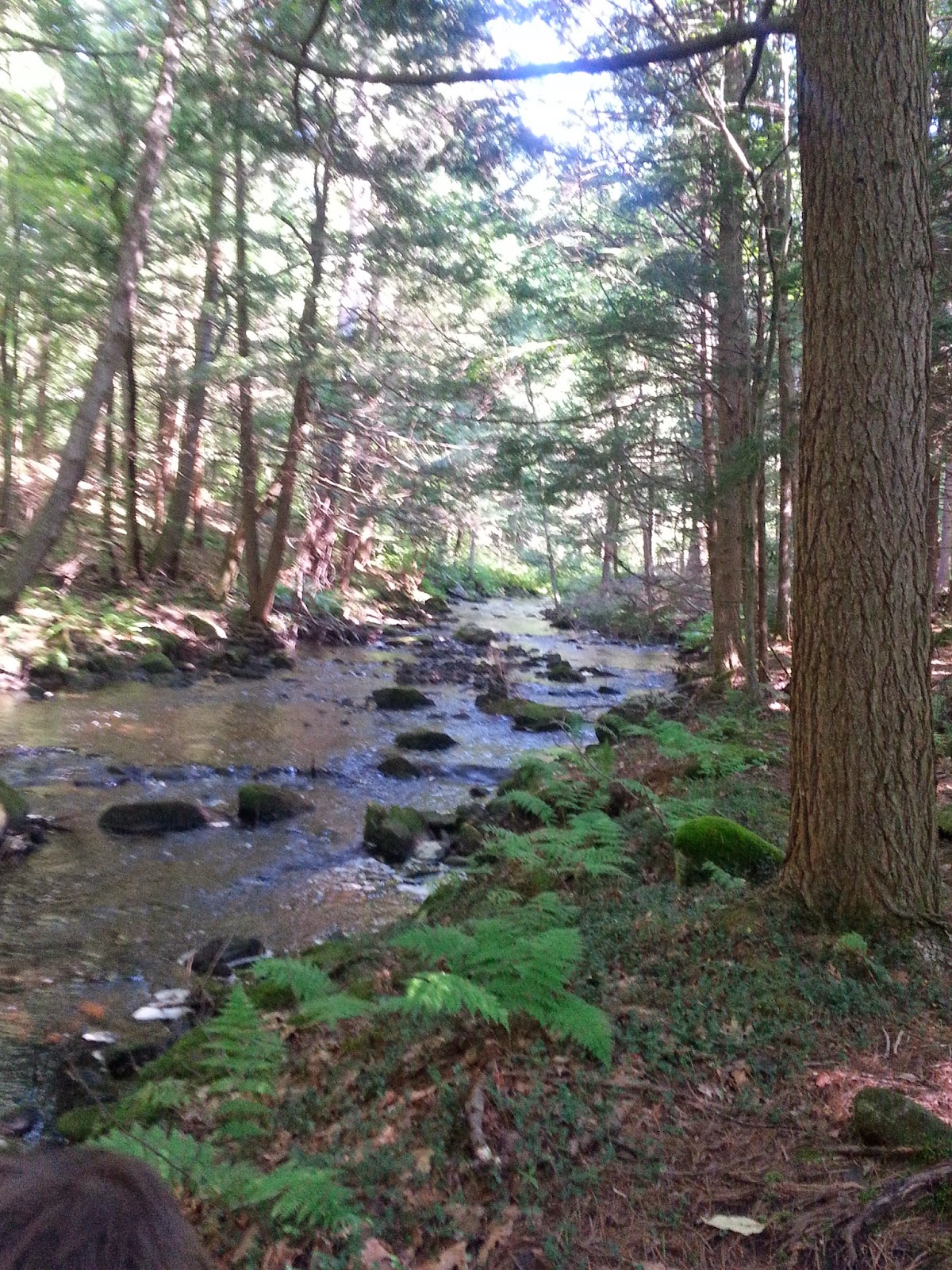 Seeing the bridge, the two explorers took off running to catch the view.  They loved it.  The funny part, was that there is a rock written to honor the man who donated this land, memorializing his name in a bronze plaque recessed into a granite boulder.  (this is a Trustees of Reservation property, a private land stewardship group based here in MA.  They occasionally buy land, but most of the time, it's donated to them for preservation.)  The plaque is not the part that was funny, but the fact that they knew those were words on that rock, and that they wanted me to read it about 15 times... that, was funny!

About 80 yards further up and the stream opens into a substantial beaver meadow before getting into a steeper gradient again. 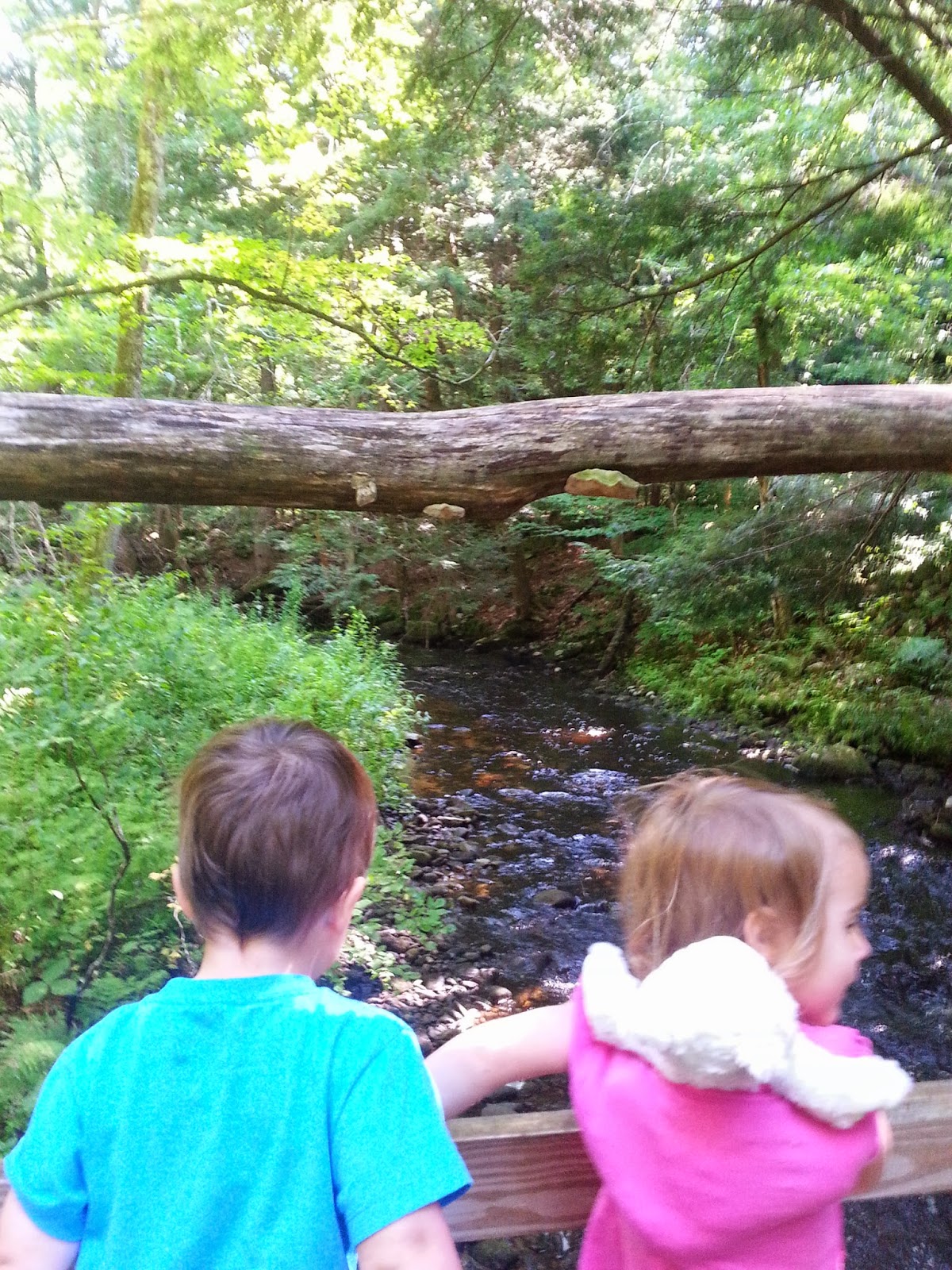 We walked up from the bridge into an old pasture that now is growing up with goldenrod, raspberries and blackberries as well as other grasses and weeds.  Emily promptly started to eat some black berries.  Then she asked me if Bears (we had talked about bears that live in this area) ate blackberries too.  I told her yes... and we all kept eating berries.  Then she said something to the effect of: "berries are called berries because bears eat them."  I wont look at wild berries the same again!  Ha! 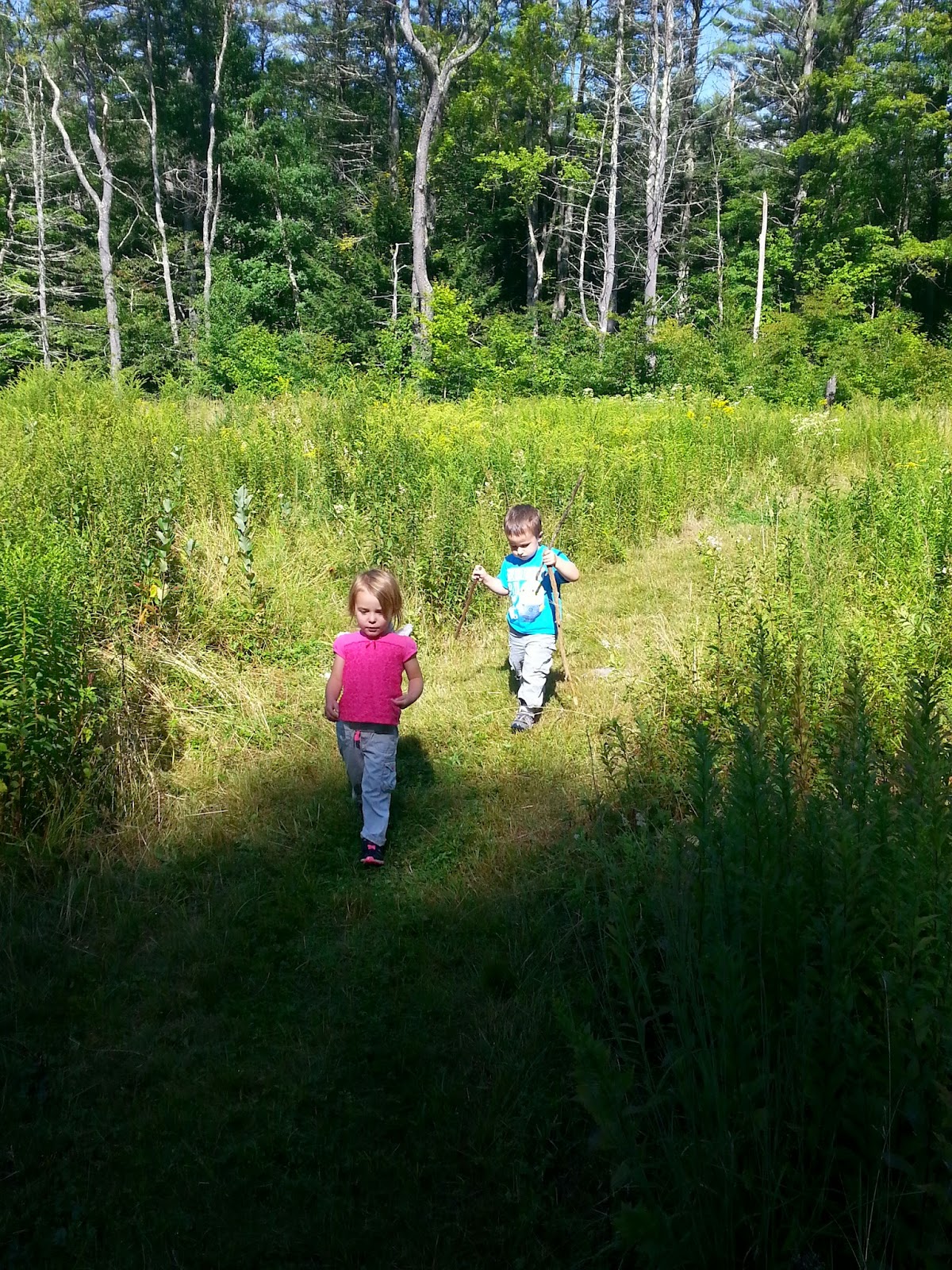 We hiked across the meadow, then stopped to see some friends, they were not home, so we drove to my folks (all in the same town) and had a surprise lunch with Mia and Grampy - who were pretty happy for the surprise visitors!

Very fun to see them enjoy the outdoors... Awesome actually!

Will
Posted by Hibernation at 6:45 PM No comments:

I've been really busy of late.  Applying (and getting into) to grad school, work, life etc. have been keeping me off the water.  But I have put out the trail cam locally and have seen this doe and fawn in pictures many times.  Looking forward to seeing them in the fall bow in hand.  The little guy would get the pass... I'd have to think about the doe.  Some healthy and delicious dinners for the family there. 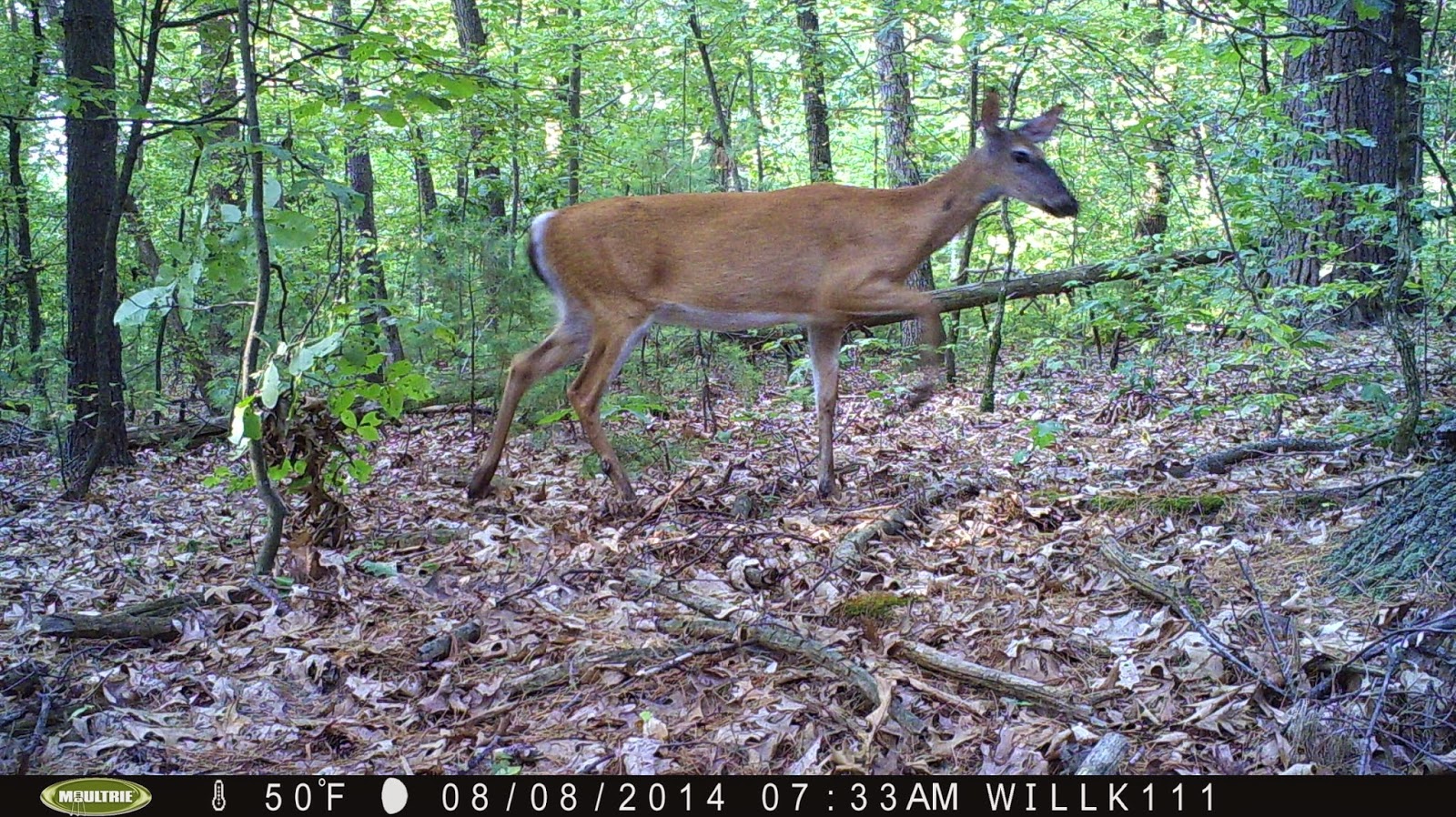 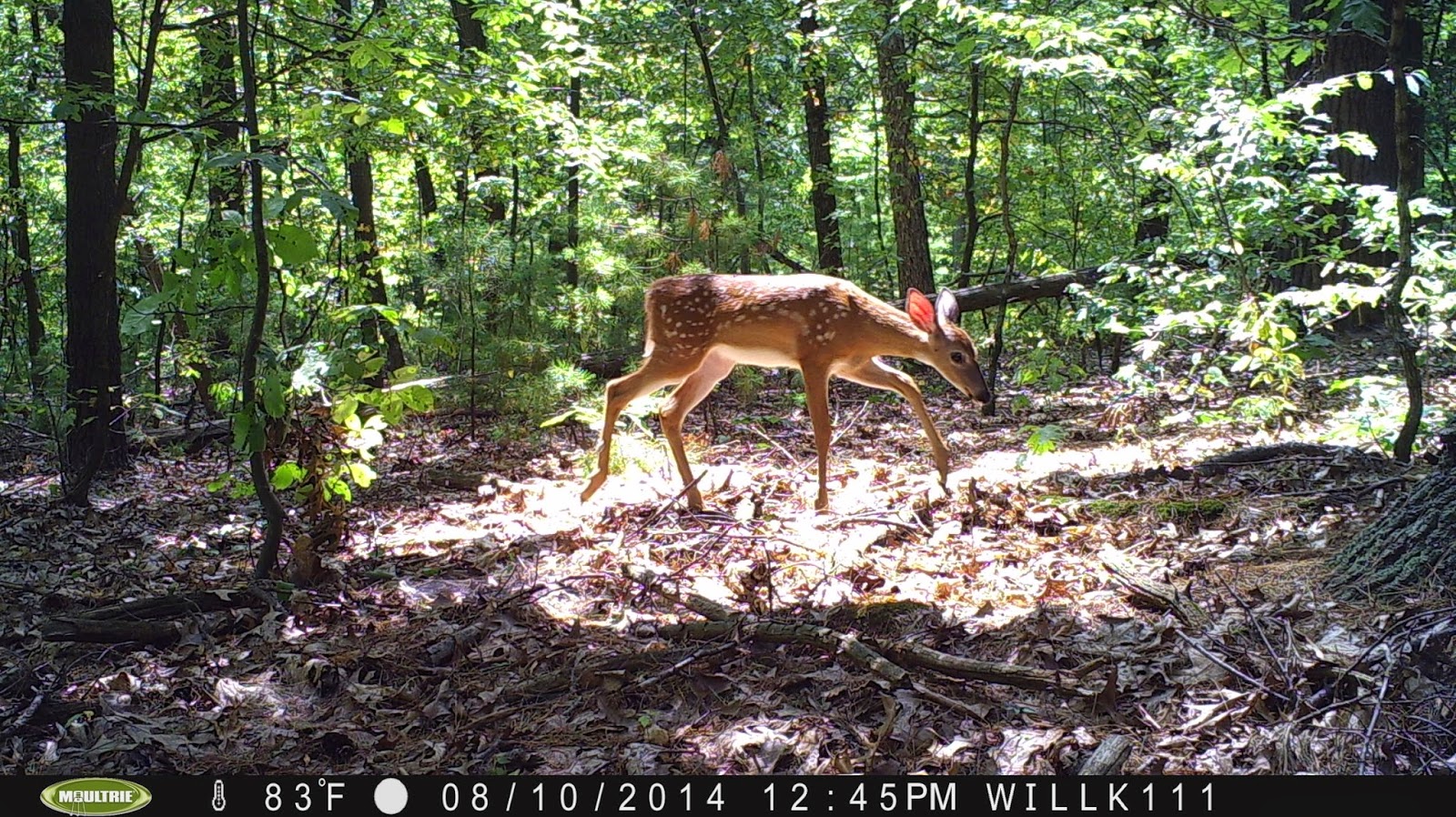 Will
Posted by Hibernation at 10:36 AM 2 comments: